The most ridiculous thing happened. We went up to San Fransisco last weekend for a little family trip. It was great to switch it up, relax, and reaffirm our love for SoCal coastal beach living. We decided to let the kids pick out a souvenir to take home with them. Of course, Nolan picks out a fun flipping (it literally flips) race car that has zero relevance to the city of San Fransisco other than the locale of purchase. But, as many parents know, as much as you try to guide your children, at some point they make their own decisions and that car was basically attached to him from that point forward.

Two days after its purchase, he decided to roll it on the sidewalk. He lost control of it at some point near the street. It flipped down off the curb and zoomed right down into the sewer. You can imagine his response.

After many and many tears (not mine. His. I was crying on the inside), I convinced Jaryd to MacGyver some contraption to retrieve the race car from the sewer, since it was visible and only a couple arms reach too far.

Jaryd ran to the neighborhood pool (I love him), and returned with one of those pool nets to collect leaves. Except he didn’t plan on collecting leaves. He was planning to collect that car.

As he came eye to eye with the sewer to get a sense of where to aim the net, he peered in at where he once saw the race car. Only instead of that red and green plastic piece of happiness, he saw two beady little eyes starting back at him. It was a raccoon. A raccoon who stole the race car. Never to be seen again.

It sounds ridiculous, I know, but I’ve seen these raccoons around and apparently they live in the sewer near our house. And, instead of returning the race car like a fine, well-behaved raccoons, they apparently steal them and keep them for themselves.

All I can say is thank God for Amazon because within minutes of the raccoon encounter these babies were ordered and delivered to me two days later.

I realized at the outset of this recipe that I haven’t cut zucchini in the traditional sense in quite some time. You know, with a knife. I’ve been allll about spirlizing. I can’t help myself, spiralizing is SO easy. And fun. And it just looks cool.

Zucchini is all over the place lately because, well, it’s summer. And, I hate to be a buzzkill but summer is winding down. So, I wanted to get one more recipe in, so you can use up all that zucchini growing in your garden. Still have a zucchini surplus? Try these zucchini squares, these Parmesan crusted zucchini fries or these double chocolate zucchini muffins!!

I usually reserve veggie bakes for wintertime when it feels like you need something super thick and hearty to warm you from the insides. I was wondering if veggie bakes could ever make a seasonal crossover and I think I found the answer: zucchini.

Zucchini is THE vegetable to transcend boundaries both categorically and seasonally. Using zucchini keeps this gratin lighter and summery, yet it’s still filling and hearty. The zucchini really absorbs the sweet caramelized onion flavor and the mouthwatering pancetta. OMG I’m drooling just thinking about it! ha!

But let’s do the damn thang. Let’s make Zucchini Pancetta Gratin because it’s bomb. And delicious. And will totally change your veggie bake game. I mean, not to hype it too much, but…

Cut the zucchini and squash crosswise in thin slices. Try to get them about 1/8 inch thick. Place them in a large bowl and toss with avocado oil, salt and pepper. Line the zucchini across a baking dish so they are standing up. Bake for 30 minutes until they are tender and browned on the top. While the zucchini is baking, sauté the chopped onion in a tablespoon of avocado oil over medium-high heat for about 5 minutes. Add the garlic and pancetta and continue to cook for another 3 – 5 minutes until the onions are golden brown and smelling amazing. Set aside.

In a small saucepan, whisk together the milk and arrowroot starch. Add the Gruyere and continue to whisk until it’s smooth. You can leave out the arrowroot starch if you don’t have it on hand, just keep whisking at a slow boil until it thickens a bit.

Sprinkle the onion and pancetta mixture over top the zucchini. Then, pour the cheese mixture on top.
Bake for another 20 minutes until golden brown on top. 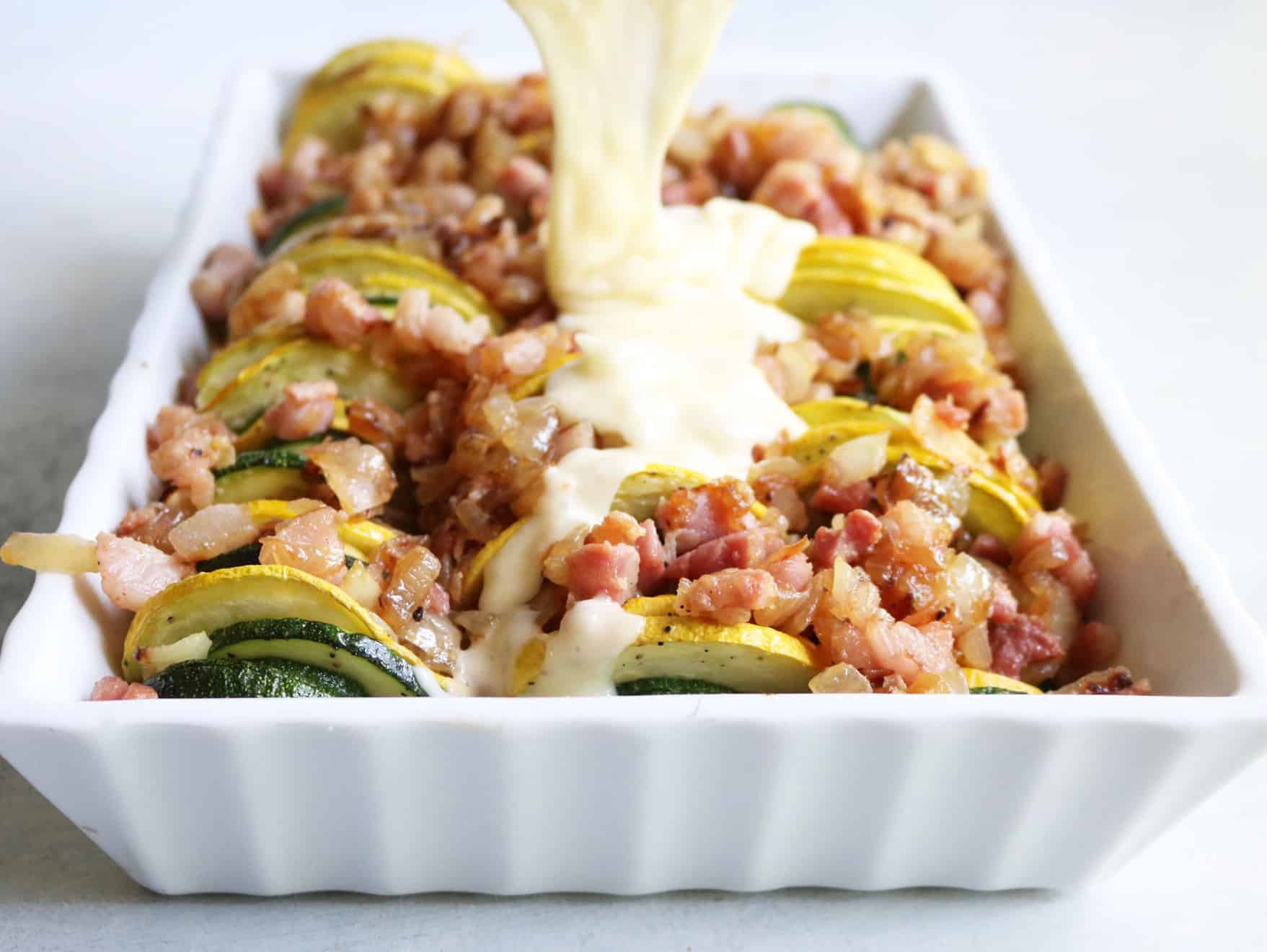 Save this for later!! Pin this image 🙂

Get new posts via email: 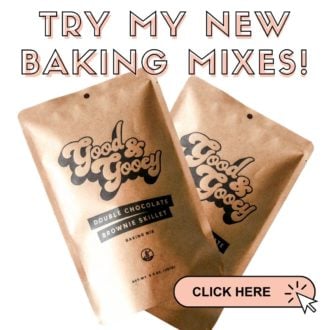 I'm Lindsay 👋🏻 I love sharing simple, gluten free recipes!! When I'm not in the kitchen, you can find me at the beach watching my kids boogie board and soaking in that warm Cali sun (with sunscreen, of course 😜). Play with your food!

Get new posts via email: