If I could, I would go to a coffee shop multiple times a day. There is something I love about having someone make me coffee, put it in a paper coffee mug, and sip on something that doesn’t taste like the crap I have at home. Ok, in all fairness the stuff I got isn’t total crap. It does the trick. Jaryd says he loves it (um, not so sure about this). I just love the coffee shop experience. We went to visit friends in New York (Hi Katie and Steve if you’re reading!) and they had a cappuccino machine which was beyond cool. Oh, you want a perfectly frothy cappuccino? No problem. I spent about a month after our visit searching Craigslist ads for a cappuccino machine because I truly think it would revolutionize my home-coffee experience. Well, my search produced absolutely nothing, so I’ve hung the dream on a hook and am saving it for the future.

Generally what happens in our house is we make a pot of coffee in the morning, have a morning cup, and then pour the rest into a mason jar and pop it in the fridge for an iced latte during post-lunch naptime. It’s a much needed pick me up that I look forward to all morning. But I think it would be a fun treat to learn how to cold brew. It gets rid of the midday regret when I forget to put the leftover coffee in the fridge and instead of an iced latte I end up drinking a room temperature latte. You know what I mean? I have no idea how to cold brew, so I researched a bit and thought I’d give it a go. Sorry if that was incredibly boring. I went to the wiki page thinking there would be some revelation about how awesome cold brew is, some history about where it all began, or historic figures that loved to drink it, but instead that happened. I originally wrote “five things” and then read the wiki article and could only find three things that were half worth repeating. To be honest, I don’t even know if they were worth repeating. Anywaysss… But seriously? The truth behind this post is I’ve heard about cold brewing and it seems to be super trendy, or maybe it was like 2 years ago, and I want to try it. So there you go.

I definitely have to say that after drinking it, I love it so much more than my leftover hot brewed lattes. I found it to be more flavorful and it made me appreciate the taste of the bean a bit more. I also didn’t get that bitter coffee taste from the first sip. This is a winner!

Here’s how you do it:

Coarsely grind your beans, you don’t want them too fine. Put them in the water, stir, and set in the fridge for at least 12 hours. The picture below is of the coffee grinds floating in the water, inside the pitcher. When you take it out of the fridge, you want to strain it. I used a metal strainer and then on top placed a cheese cloth. You could also use a paper towel, or a regular coffee filter. Jaryd took one look at the cold brew when I took it out of the fridge and was like “I would strain that if I were you.” haha um, I know. Whatevs, the other thing I’ve seen is people don’t leave the coffee grounds loose in the water but instead place them into a coffee filter, tie off the end of the filter with a rubber band and then throw the ball into the water. This is kinda hippie dippie of me, but I like the idea of the grounds free floating in the water and having space to release their flavor. This may make zero scientific sense, but if all the grounds are bunched up in a ball, I feel like there is less surface area for water to hit and thus the brew won’t be as flavorful.

Just a gut thing that makes sense to me but not sure if it’s actually backed by anything… Ok, I just consulted the scientist (my husband) and he said the ball version would just take longer, to brew (like 24 hours) whereas the free floating version will take less time. Kinetics or something. I like my way the best. Do it my way! 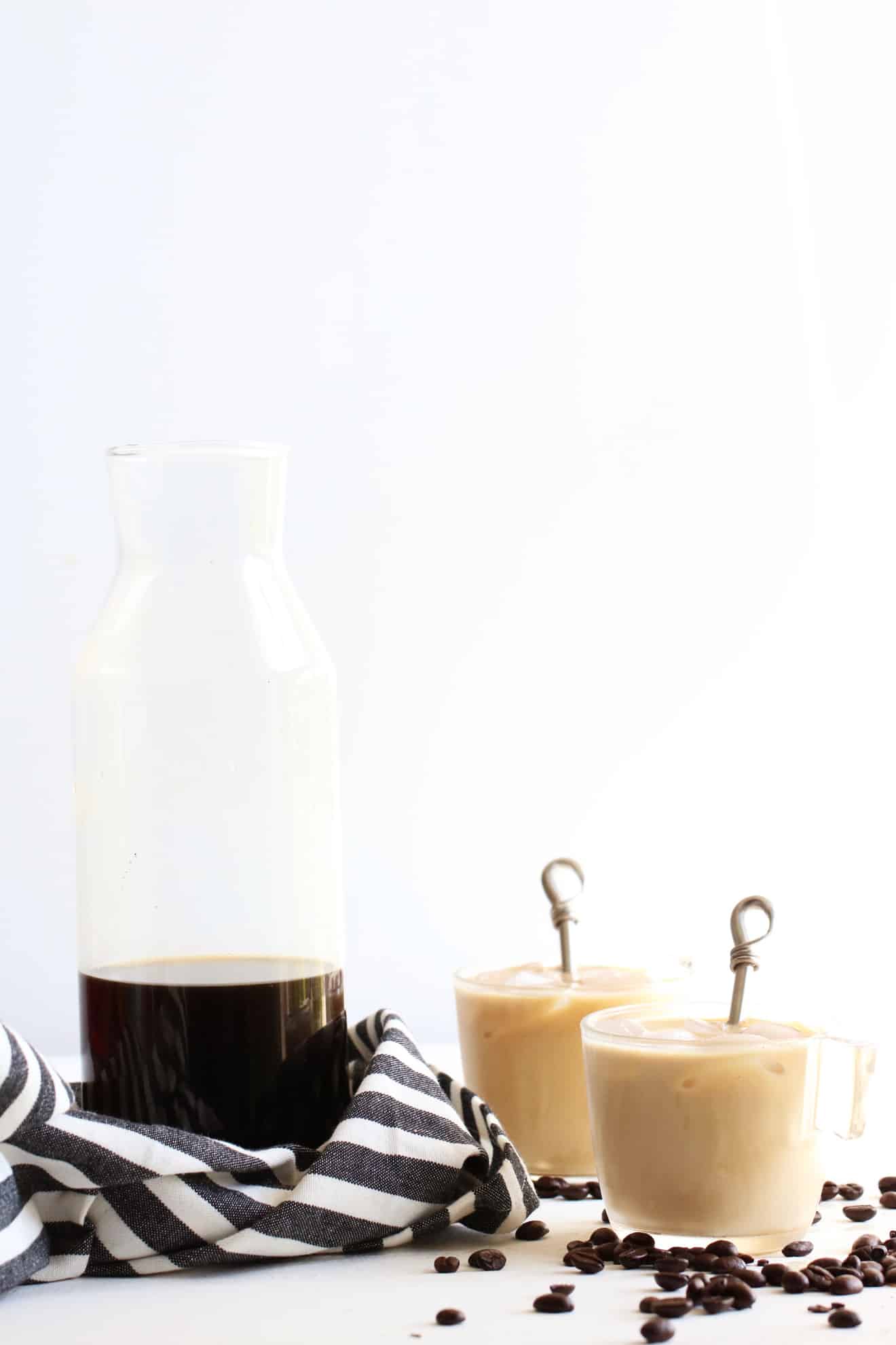